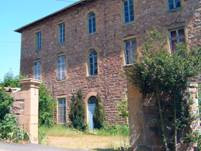 Jarnosse is a little village near to Coutourve where Jeanne-Marie Chavoin, our Foundress was born.
Jarnosse had a population of 1344 inhabitants, it was there that our Foundress arrived in 1855 with three other sisters to establish a new community.
They were made very welcome by the local people and the Parish provided a small house where the sisters lived until their Convent was built. It was a difficult mission but Jeanne-Marie and the community were not daunted by this, they placed all their confidence in God knowing that they were responding to a great need of the time.

A young girl who knew the sisters writes as follows:

“It is a fact that our country sides are in a bad state, there is so much wretchedness, much ignorance, physical and moral evil. No one comes to the help of all this suffering. No one sees the good that could be done, here there is a splendid opening for any Christian. The Marist Sisters are opening a little convent in Jarnosse. No one would have dreamed of choosing a poky hole like that, but Providence sees further than people and does not disdain the last and the least. At the head of the work is the Foundress of the Marist Sisters. She is already an old woman, a generous soul and above all has a heart filled with love.”

When the house was established in Jarnosse the sisters dedicated themselves to the education of the people and especially the children. They taught them religion and the basic skills of reading and writing. They acted both as teachers and as mothers preparing the young girls to take up their role in society at that time. They visited the families, and also the sick, consoling them and preparing them for death.

A statue in the Church

The work flourished and 60 young girls between the ages of 16 and 18 became boarders thus beginning a school of domestic science. Not only did they receive a basic education but they were formed in Catholic principles and practice. This private school lasted until 1891 when it amalgamated with the public school in the area. Even the poorest of children were educated there. The sisters also organized a club for girls, looked after the sacristy in the Church and prepared the children for the Sacraments.

Mother Foundress related to the people with humility and simplicity and was thus able to help them to recognize their own basic goodness. She showed herself as a beacon of hope to those who were experiencing the harsh effects of the social and religious upheaval of the time. She and the sisters lived close to the people and were in touch with their daily problems and fears. Their style of presence and approach was welcomed

and became a channel through which the Gospel message was received. She had a deep understanding of what the Founder Jean Claude Colin had in mind when he spoke of Marists as being instruments of Divine Mercy and of how the feminine branch was prepared to live
the ‘hidden and unknown’ formula of the Society of Mary.

After the death of the Foundress the work continued until 1902 when the house was closed.